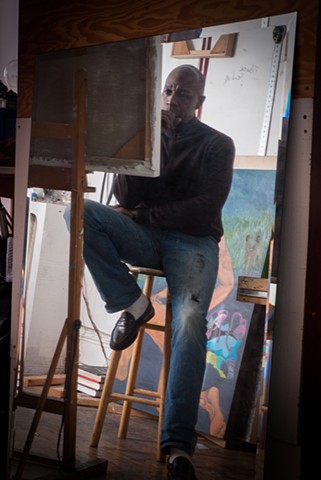 My roots are both rural and urban. I was born on a farm in Georgia, delivered by my great-grandmother, the local midwife and matriarch of the family. She raised me until she passed away, when I was 11 years old; then I moved to live with my mother in the inner city in Miami, Florida. My work reflects these two juxtaposing worldviews, and is antecedent to the multiple layers, meanings and ambiguity of my art.

After I received my M.F.A., I moved to New York City. I thrive on city life, and I imagine that the city feeds me in unfathomable ways. Sometimes it feels like it feeds on me, too – I’ve worked as a bartender in multiple restaurants and managed innumerable social events as a manager. I’ve been an actor in film and on the stage, and a print model for a myriad of commercial products and services. Through it all, my art has been my touchstone. It’s where I’m able to explore and experiment, allowing me the freedom to visually document the existential nature of our beings. For me, the psychological journey is the heart of my message as I honor and elevate femininity.